Cause Another Housing Crash?

It’s been 10 years since the last housing crash of 2007, where property values declined for the next 6 years. If you bought a house between the years 2005 – 2008 I’m sure you remember how quickly your equity disappeared and how you felt. So, if you are even thinking about selling your house in the next few years here is some information you might want to consider.
Most people, including news sources, especially the Daily News, which I used to read back then, real estate agents, and economists didn’t want to believe, or didn’t want you to believe, that we were in a housing bubble then and half the country doesn’t believe we’re in one now. Hou
Currently housing prices are near or even exceeding the pre-2007 housing crash. Every month prices seem to be hitting record highs while mortgage rates still remain at historic lows. But what happens when rates start climbing? How does this affect affordability and equity? Check out the chart below that I put together a couple of months ago.
The following illustration demonstrates what a mortgage interest rate increase of just 1% can mean for the housing market. Single family housing statistics for June 2017 in San Fernando Valley showed a median listing price of $800,000. The illustration uses the same income, 20% down payment and debt ratios with variable mortgage interest rates.


As you can see higher interest rates directly affects lower buying power/affordability. Although prices have been climbing overall sales have been decreasing. A couple of factors are in play here; one is a lack of inventory and the other is affordability. 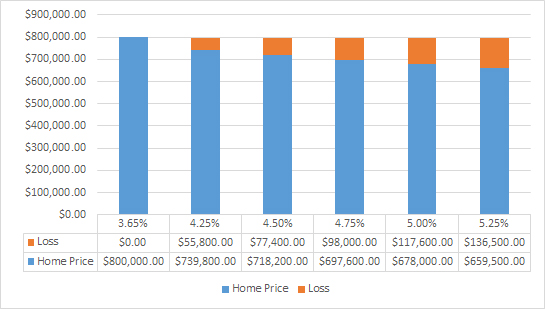 In April of 2016 interest rates hovered around 3.64%. In April 2017 interest rates averaged 4.25% after a Fed rate increase in March 2017.  Rates have been a bit volatile during the last couple of months even after the Feds slightly increased rates in June. They have signaled that there will be more increases this year, perhaps as early as September.
Although the Great Recession is officially over, according to Pew Research in 2015, Americans are still 40% poorer today than they were in 2007, the year before the global financial crisis.

So, what does all this mean for you? Well if you are a prospective home buyer and can afford a down payment and qualify for a loan now may be the time to act while rates remain relatively low. If you are a prospective home seller and are considering moving in the next couple of years this may be the time for you to sell.
While I’m sure we all wish we had a crystal ball no one can accurately predict what will happen in the future. There is an old adage in real estate that says; timing is everything.  But not many of us can predict the top of the market or the bottom of the market.
Posted by Jeff and Cheryl Fox at 2:49 PM

Jeff and Cheryl Fox
Cheryl and Jeff bring a unique perspective to residential real estate services. In addition to being a notable and experienced Realtor, Cheryl is also a seasoned CPA. Jeff is a Vietnam War Veteran serving real estate buyers and sellers since 1974. Integrity and Service is not merely a “tag line” for Jeff and Cheryl, it’s a philosophy that they live by. Jeff and Cheryl have two children and two grandchildren.Jeff has lived in the San Fernando Valley since 1956.